The 2014 Close the Gap Prime Ministers report released yesterday by the Australian Government reveals that despite progress in some objectives that we are still facing many challenges in key areas. In order to achieve health equality amongst all Australians it is imperative that Aboriginal and Torres Strait Islander peoples are afforded the same opportunities to access doctors, medicines, and allied health services. Indigenous Allied Health Australia Chairperson Faye McMillan commented “IAHA is committed to the Close the Gap campaign and Steering Committee, and we will continue to advocate on improving the health and well-being of Aboriginal and Torres Strait Islander peoples, particularly within the allied health sector.” 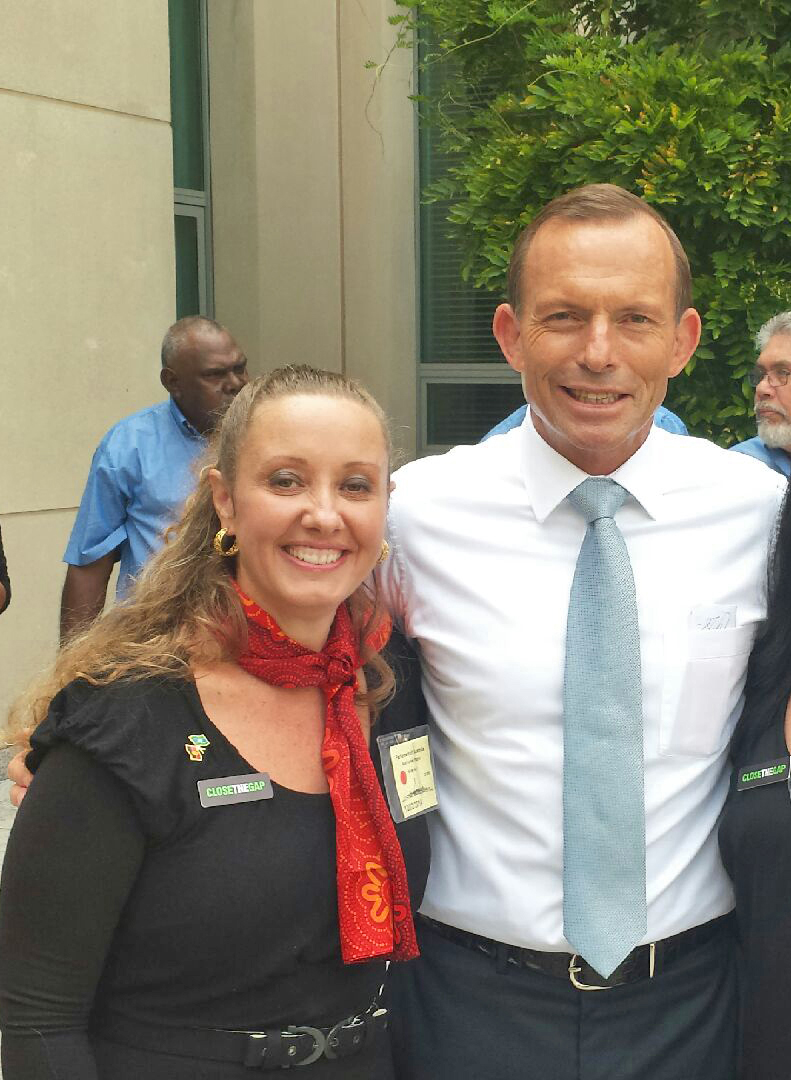 Prime Minister’s Speech – 12 February 2014:
It has become a personal mission to help my fellow Australians to open their hearts, as much as to change their minds, on Aboriginal policy.
We are a great country – I firmly believe the best on Earth.
But we will never be all that we should be until we do better in this.
There is no country on Earth where people are made more welcome.
There is no country on Earth whose people have more innate generosity to others.
Yet for two centuries – with fragrant exceptions, of course – Australians had collectively failed to show to Aboriginal people the personal generosity and warmth of welcome that we have habitually extended to the stranger in our midst.

Even as things began to change, a generation or two back, our tendency was to work “for” Aboriginal people rather than “with” them.
We objectified Aboriginal issues rather than personalised them.
We saw problems to be solved rather than people to be engaged with.
If that hardness of heart was ever really to melt, I thought, that change had to include me.
Because you can’t expect of others what you won’t demand of yourself.
So as a backbencher, I spent a few days every year in central Australia and always included a dinner with Charlie Perkins.
As a minister, I tried to spend a few days every year in remote Aboriginal communities – especially in Cape York and later in the APY lands for which my portfolios had particular responsibilities.
Yet after 14 years in the parliament, I found that I had visited dozens of Aboriginal and Torres Strait Islander places and not spent more than 12 hours in any one of them.
As shadow minister for Aboriginal Affairs, I asked Noel Pearson if he would help me to spend some serious time in individual communities where I could be useful – rather than just another seagull, as Aboriginal people so often called officious visitors.
So I spent three weeks in 2008 as a teacher’s aide in Coen; 10 days in 2009 as a truancy helper in Aurukun; four days in 2011 doing bush carpentry near Hopevale; and another four days in 2012 helping to renovate the Aurukun school library.
Later this year, as Prime Minister, I will spend a week in East Arnhem Land along with enough officials to make it, if only for a few days, the focus of our national government.
After 226 years of intermittent interest at most, why shouldn’t Aboriginal people finally have the Prime Minister’s undivided attention for seven days!
None of this makes me more worthy or less fallible than any of my predecessors – but it does demonstrate that this Government is serious about Aboriginal policy.
No less serious than it is about stopping the boats, fixing the budget, and building the roads of the 21st century.
I pay tribute to former prime minister John Howard for first proposing to recognise indigenous people in the constitution.
I pay tribute to former prime minister Kevin Rudd for the national apology.
I commend former prime minister Julia Gillard for continuing these annual Closing the Gap statements to focus the parliament’s attention on problems that might otherwise be neglected or glossed over.
I thank Kirstie Parker and Mick Gooda and members of the Closing the Gap steering committee.
I welcome the presence today of Warren Mundine and other members of the Prime Minister’s advisory council.
I welcome the presence of Andrew Forrest and others working on indigenous employment.
I especially welcome Fred Chaney, a former minister for Aboriginal affairs and mentor to me, whom I have often described as a distinguished elder – and who is now officially recognised as Senior Australian of the Year.
And I acknowledge the Australian of the Year, Adam Goodes, who has personally demonstrated, when bitter offence could have been taken, the “better angels of our natures”.
I welcome the first indigenous Member of the House of Representatives, Ken Wyatt, and the first indigenous woman member of this parliament, Senator Nova Peris – and I look forward to the day when the parliamentary representation gap is finally closed.
Most of all I welcome everyone the length and breadth of this great land who wants tomorrow to be better than today.
I can report that our country is on track to achieve some of the Closing the Gap targets.
The target to halve the gap in child mortality within a decade is on track to be met.
We are already close to meeting the target to have 95 per cent of remote children enrolled for pre-school – and should soon know what percentage are actually attending as well as just enrolled.
And the target to halve the gap in Year 12 attainment by 2020 is also on track to be met.
That’s the good news.
The bad news is that there’s almost no progress in closing the life expectancy gap between Aboriginal and other Australians – which is still about a decade.
There’s been very little improvement towards halving the gap in reading, writing and numeracy.
And indigenous employment has, if anything, slipped backwards over the past few years.
We are not on track to achieve the more important and meaningful targets.
Because it’s hard to be literate and numerate without attending school; it’s hard to find work without a basic education; and it’s hard to live well without a job.
We are all passionate to Close the Gap.
We may be doomed to fail – I fear – until we achieve the most basic target of all: the expectation that every child will attend school every day.
Generally speaking, the more remote the school, the more excuses are made for poor attendance.
Last year, in metropolitan areas, only 81 per cent of indigenous Year 9 students met the National Minimum Standards for reading.
In very remote areas, just 31 per cent of indigenous students reached the same minimum standard.
Yet it’s being demonstrated in places like Aurukun that a strong education in traditional culture is actually helped by a good education in English.

Right around our country, it should be possible to be proudly Aboriginal and a full participant in modern Australia.
That doesn’t just mean access to a good education in cities, towns and remote settlements – it means actually going to school.
So I propose to add a new target to our existing Closing the Gap targets: namely to end the gap between indigenous and non-indigenous school attendance within five years.
I hope I am here long enough to be judged on its achievement.
We will know that this gap has been all-but-closed when schools achieve 90 per cent plus attendance regardless of their percentage of Aboriginal students.
This was the strong consensus of my indigenous advisory council’s first meeting: that no one ever received a good education by not going to school.
Every day, in every school, the roll is taken.
Every school knows its attendance rates.
Every education department knows the attendance rate for every school.
The lower the attendance rate, the more likely it is that a school has problems.
The lower the attendance rate, the more likely it is that a school is failing its students.
It’s the duty of every teacher and every education department to try to ensure that every child attends school unless there’s a very good reason.
One of the worst forms of neglect is failing to give children the education they need for a decent life.
That’s why every state and territory has anti-truancy laws.
That’s why the former government, to its credit, tried to quarantine welfare payments for families whose children weren’t at school.
That’s why, at my first COAG meeting, every state and territory agreed with the Commonwealth on the need to publish attendance data from every school.
And that’s why, at 40 remote schools, the Commonwealth is already funding new anti-truancy measures that, on day one of the 2014 school year, in some communities, seem to have boosted attendance from under 60 per cent to over 90 per cent.
Our job is to break the tyranny of low expectations.
That’s why indigenous school attendance data will be part of the next Closing the Gap report and all subsequent reports under this Government.
The parliament will be brought up-to-date on the relative success or failure of Aboriginal education because a good education is fundamental to a good start in life.
Future Closing the Gap reports should also include data on work programme participation and data on communities without a police presence.

These reports, after all, should be less about what government is doing and more about how people are living.
We will know that Aboriginal people are living better when children go to school, adults go to work and the ordinary law of the land is respected and enforced.
The first Aboriginal member of this parliament, Senator Neville Bonner, once warned his colleagues that history would judge us all.
We shouldn’t have to wait for the judgment of history and, thanks to these Closing the Gap statements, we don’t have to.
A fair go for Aboriginal people is far too important to be put off to the judgment of history.
We have to provide it now – or as soon as we reasonably can.
I am confident of this: amidst all the mistakes, disappointment and uncertain starts, the one failure that has mostly been avoided is lack of goodwill.
Australians are now as proud of our indigenous heritage as we are of all our other traditions.
The challenge is to turn good intentions into better outcomes.
I am confident that, these days at least, for every one step backwards we are also taking two steps forward.
To give just one example: on every ministerial visit to the APY lands, I used to complain that there were just eight police for 3000 people spread over an area the size of Scotland – and that none of them lived in any of the places where they were needed.
Six years later, these are hardly model communities, but every substantial settlement has a permanent police presence – thanks to the good work of the South Australian Labor government – because this was an objective beyond politics.
As Fred Chaney has just said, reflecting on a lifetime of work with Aboriginal people: there is so much left to do but – in this area – these really are the very best of times.
There is probably no aspect of public policy on which there is more unity of purpose and readiness to give others the benefit of the doubt.
On this subject, at least, our parliament is at its best.
Our duty is to make the most of this precious moment.
[ends]